Now let’s see how all that money is spent but first we need to define a couple of terms.

Below is the budget information for 2015.   I apologize for the somewhat fuzzy graphics as I could not find better better that were from the Office of Budget Management or OBM.  As you can readily see from the charts below the vast majority of spending is on social programs with defense (the military) taking 16% of the budget, all of which is considered discretionary spending. 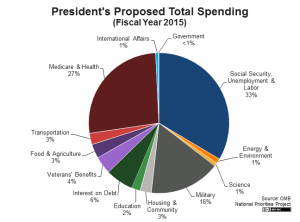