Is Institutional Racism, pertaining to the Black community, rampant in the US?

The answer is a resounding NO!

Are there racist in the US, absolutely YES.  Is there a racial bias, YES,  However, is that racism institutionalized, NO.

Fortunately a bias can be altered through education and/or people changing their attitudes.  It can be a long process but bias’ can be changed.  Unfortunately, institutional racism cannot be changed because it is inherent to the organization and is passed on independent of the people in the organization.

The Black community is a victim of racial bias and not institutional racism.

That can be substantiated by a variety of measures but here are two:

Since reason #2 is pretty self evident, let’s look deeper into reason #1, since most people would not think that is possible let alone believe it.  As many people know, the US Census bureau compiles statistics on the US population, one of which is breaking the overall population into quintiles based on income.  This statistic is often used behind the phase “the rich get richer and the poor get poorer”.  Pretty self evident, but also pretty meaningless, since, as the economy expands the upper bar moves upward but the lower bar ($0.00) stays the same.  What is much more important is; what happens to the people within the quintiles over time?

For example, recent research from the Federal Reserve Bank of Minneapolis is summarized in the table below, based on income data from the Panel Study of Income Dynamics that followed the same households from 2001 to 2007.  The empirical results answer the question: For households that started in a given earnings quintile (20 percent group) in 2001, what percentage of those households moved to a different income quintile over the next six years?

Bottom Line: In the discussions on income inequality and wage stagnation, we frequently hear about the “top 1%” or the “top 10%” or the “bottom 99%” and the public has started to believe that those groups operate like closed private clubs that contain the exact same people or households every year.  But the empirical evidence displayed above tells a much different story of dynamic change in the labor market—people and households move up and down the earnings quintiles throughout their careers and lives. Many of today’s low-income households will rise to become tomorrow’s high-income households, and some will even eventually be in the “top 10% or “top 1%.”  And many of today’s “top 1%” or top income quintile members are tomorrow’s middle or lower class households, reflecting the significant upward and downward mobility in the dynamic U.S labor market – an important point in any discussion about “exploding income inequality.”

So what does this have to do with institutional racism, yes or no?  Below is a chart from a study by the Pew Trust. 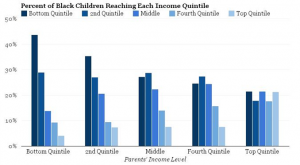 So if it is not Institutional Racism that is going on in the US, what is it because things certainly do not seem right for Blacks in the US?  Consider this; the prime reason most people think there is Institutional Racism in the US towards Blacks is because their arrest rate is much higher than their “pro rata” share of the population.  The theory is if they represent 13% of the population then they should only be 13% of the arrests and incarceration.  According to the FBI, in 2012, Blacks made up 28.1% of all arrests, even worse they now make up 43.5% of the incarcerations according to the NAACP.  Overall Blacks commit 53% of the crimes in the US, a much greater percentage than suggested by their proportion of the population.  On the surface, this data sure could make a case for Institutional Racism focused on Blacks.

However, let’s look a little deeper into the statistics.  According to several studies, there are 3 traits that are common to all prisoners, independent of their race.  The three common characteristics are: prisoners are illiterate having less than a high school education, they grew in poverty, and they come from single head of household families. Now which race leads in all three of those traits; Blacks by a wide margin.

Therefore, if Blacks lead by a wide margin in all of the traits leading to incarceration, wouldn’t it stand to reason that they would also be disproportionate in the rate of arrest and incarcerations?

So here is a theory to consider when assuming there is Institutional Racism in the US. Maybe Blacks have a bi-nodal population distribution where the majority of the Black population obtains an education, get a job, raises a family an participates in all of the positive aspects of the general US population.  Unfortunately a minority of the Black population devotes their lives to criminal activities with great violence; reference the article “Police and Guns are Not the Blacks Problem”.  The main point of the article being that Black on Black crime, mainly murders, is vastly disproportionate from their percentage of the population.  Maybe this disproportionate amount of violence perpetrated by blacks leads to a racial bias as opposed to Institutional Racism.

If we keep on blaming “Institutional Racism” for the problems that plague the Black Community it is unlikely that the root problems will ever be addressed and solved.  However, if the people genuinely interested the future of all Blacks focused on Black scholastic achievement, the Black unemployment rate, and building 2 parent households in the Black much progress could be made.

The old saying just might be true; it is hard to solve a problem if you are looking at the wrong problem.